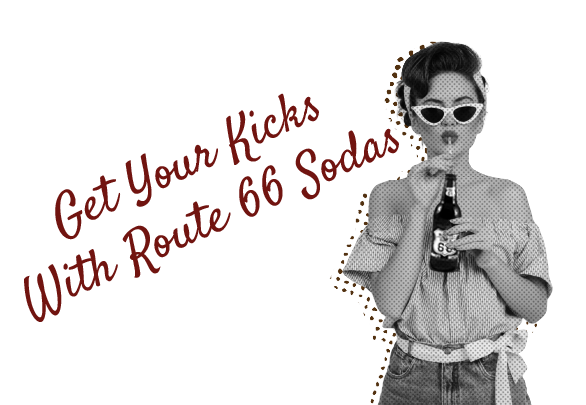 Almost everyone knows how to make a root beer float so we won't challenge
your intelligence. But we will give you a little history that suggests
you include Route 66 Root Beer to excel. If you use any other
brand of root beer, we can not guarantee the results (<--- blatent sales pitch)

A ROUTE 66 ROUTE BEER FLOAT is a dessert that consists
of ice cold Route 66 Root Beer and ice cream, traditionally vanilla.
It is usually made by scooping ice cream into a large glass or mug,
then pouring in our root beer.

The microscopic bubbles present
in the ice cream act as "nucleation sites" which
trigger the formation of large bubbles of carbon dioxide.

Route 66 Root Beer foams more than other soft drinks and
the foam often overflows the container. While this is part of the
fun, the amount of foam can be reduced to a more manageable level
if the root beer is poured first and the ice cream is then gently
lowered into it for those of you who can't stand a little mess.

Route 66 Root Beer floats are usually eaten with a spoon.
A popular technique is to take some ice cream in the spoon, and
eat it, a fairly uncomplicated task considering the reward.

When
all of the solid ice cream is eaten, the remaining mixture of root beer
and melted ice cream can be drunk either with or without a straw. Hard
choice to make, but you can handle it.

A root beer float can also be blended
to create a consistently textured beverage like a milkshake. This is
often called a root beer freeze, however, this is often not called a
root beer freeze, meaning you can call it anything you want to.

WOW - that was so interesting - we're gonna' go make one
right now!

Drink through the cinnamon straw stick
for a refreshing, relaxing after dinner or bedtime beverage - a "Toddy" you
can share with everyone, any age

In a large mixing bowl, stir all ingredients together, then blend 2 to
3 minutes with hand mixer until combined smoothly

Let cool, preferably on wire rack before frosting or slicing

Let it drip down the sides too !

We are not responsible for weight gain, sugar highs
or squeals of delight from your family and friends

Let it drip down the sides too !

With mixer on low, beat together Route 66 Route Beer, cake mix, and
eggs, oil for about 2 minutes, increasing mixer speed to medium and beat for
another 3 minutes

Stir together in a bowl -

Sure tastes GOOD to us
hope you enjoy it - and often too!

In large mixing bowl, mix brown sugar, dark brown sugar and butter until
light and fluffy. Add farm fresh eggs one at a time until integrated, then
stir in flour mixture and ½ bottle of Route 66 Root Beer

Place dough
into baking sheets lined with parchment paper using a tablespoon cookie scoop.
Bake 8-10 minutes until edges are golden. Let cool for 1 minute, and move to
a wire rack to complete cooling

In a small bowl, mix confectioners sugar
and enough Route 66 Root Beer to thin the glaze. Then trickle glaze over the
cooled cookies

Look out for a rush on the cookie "goodies"
did you make enough?

Pour Route 66 Root Beer into saucepan & heat over medium flame,
reducing the Root Beer until it has a light syrup like consistency. Let
cool slightly

With a fork, prick the piecrust and brush lightly with egg white.
Pour filling into the piecrust, garnish the top with pecan halves and
bake in center of the oven about 40 minutes. When a knife inserted in
the center of the pie comes out clean, the pie is done

Add a scoop of Vanilla Ice Cream, or fresh whipped cream on top
and get ready for the compliments

Not into Ice Cream or whipped cream?
add some warm peaches as your topping

Place the pork tenderloin in a slow cooker; pour the Route 66 Root Beer over
the meat

Cover and cook on low until well cooked and the pork shreds easily,
6 to 7 hours, maybe even a little more noting the actual length of time
may vary according to the individual cooker

In a separate bowl, make a thin paste by mixing cornstarch and water.

When the mix in the saucepan starts boiling, add the cornstarch and
mix well, then add the apples and bring to a boil.

Add
the carrots. Return to a boil, cover and cook for 5 minutes

Uncover and boil
until tender, stirring occasionally, for about 15 minutes

Remove the pan from
the heat and stir in the thyme, Serve

Who was it that said: "My kids will never eat cooked carrots?"

Cook onions in oil until tender - then add
remaining ingredients

In a large saucepan, low simmer Route 66
Route Beer until reduced to about a cup

Stir in the remaining ingredients
- except butter

Continue to simmer for about another 20 minutes, stirring
when appropriate

Then whisk in butter to thicken up the sauce

Don't wait for a special occasion
try this one tonight

Blend together in blender for 2 minutes (okay, add a few seconds
if you wish)

Heat Route 66 Route Beer and lard until
lard is melted

Beat until smooth (that means no
lumps)

Keep adding and beating & adding & beating (are we being redundant
here?) remainder of the white flour until you have added the full 7 cups of
white flour

Knead down and let rise again

Divide in 4 portions and make into loaves.
Let rise again and bake in 325-degree oven for approximately 40 minutes. (seems
like a lot of rising goin' on here)

Put pancake mix in bowl, beat in egg and butter, then slowly pour in Route 66 Route Beer until
ingredients are moistened

Drop spoonful size of batter onto hot, greased griddle and flip over when
bubbles appear

Great way to start the day, kids will LOVE 'em, you will too!

If you do not save our collectible glass bottles, please recycle them!